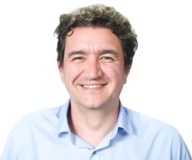 Je: I have to start this interview with a true story. I was listening to the New Jungle Orchestra at my office and a friend came. „What is this music?”, he asked. „A Danish guitar player and his band”, I replied. „Yeah, right, Danish”, he mocked. But when he understood that it was the actual truth, he said just „give me that!” So I can report that you have one more than fan here in Romania :)) How many times did you see people raising an eyebrow when hearing that you are Danish and you play such music? :))

Pierre Dorge (foto dreapta): Thanks for your questions and the little story reporting a new fan. It all warms our hearts… During the years we met some music lovers that were surprised that we were a Danish band…  mixing inspirations from almost all kind of music. But I always insisted that the band should sound fresh and full of energy. In Denmark we have some vey nice songs, but at least for me – no heavy roots in a folk music tradition. And maybe that is why I back in the sixties got my interest for foreign music – Arab, Indian, African, Balkan, Chinese, Balinese and many more.

How did the connection between you and African music happen? Why did you study kora and what has this instrument brought to your music?

In the summer 1980 me and my wife Irene Becker ( piano in NJO and composer) went to Woodstock in New York to participate in a World Music Meeting at Karl Berger’s Creative Music Studio. In five weeks we met musicians from India, Africa (Yaya Diallo, Alhaji Bai Konteh, Malamin Jobarteh), Brazil (Nana Vasconcelos), Turkey (Ismeth), Europe and America. This meeting gave links to many musicians and places. We, Tom Cora (cello), Hamid Drake (dr), Ornette Coleman, Foday Musa Suso (Kora), Adam Rudolph (african percussion). With some of these people we did concerts – Ornette taught us about his Harmologic system.

In the years after did study travels to The Gambia ( the Kora music) and later Nepal ( Tibetan Monk music), Bali ( Gamalan Music) … Abakan Jazz Festival in 1989 where we met Sainkho Namtchylak. You can say that to meet the Gambian Kora is connected with friendships Suso, Bai Konteh and Malimin – all living/coming from the Brikama Town in Gambia. But we also studied the wast african polyrhythmic thing – 12/8,  mixing this with our roots from the jazz music.

I never really played the kora myself … tried to absorb the kora sound and fragment into my guitar style. That goes for all instrument I met. I studied the instruments like Asian instruments and tried to transfer it to guitar: chinese guzheng, japanese koto or african dousangouni or gnawa Gimbre.

Some critics say that your success derives from the interesting mixture between your Danish melancholy and the joy of African, Arabian and Balkanic music. How do you comment on that?

In my bag is all the Danish songs – I learned in school as a kid – many written by composer Carl Nielsen. Then as teenager in the sixties I heard Ravi Shankar in Copenhagen and later in Paris I met Maroccan music. I also met Charles Mingus music live with Eric Dolphy and Don Cherrys group with Gato Barbieri in the Montmartre Jazzhouse. Don’s approach to Ethnic music – later world music – was a very big influence on me. Later in 1969 I began to play with saxophonist John Tchicai, Han Bennink and Misha Mengelberg
I also listened a lot to Ligiti, Bartok, all kind of strange sounding foreign music. My problem was that I was self-taught and did not have any tools to analyze the music, but I was vey curious about the magical soundscapes and tried to imitate things my way. It was not exact and that slowly became my own style og making music and playing guitar.

In 1985 NJO made a version of Duke’s „The Mooche”, adding West-african poly-rhythms to his original version. Some American Jazzcritics said that we recreated his music – not just imitating. Next year we were invited to perform at the great Chicago Jazz Festival – (as this years European act) – and after that we were accepted by the Danish Jazz Police.

It’s 2014. The world is now at our grasp. But there is still so much undiscovered traditional music. Even though it is very easy for us to go there and find it. Why do you think this happens? Is this evolution or we a missing a point (or several)?

Somehow there is a luxuriance in the meeting of different cultures today. But somehow it can also be to easy to grab this and this and make a new stew – it is good if art, music is created from some kind of necessity.

Romania has strong traditional music. And foreign musicians are coming more and more to listen to it and get inspired. How important is it for a musician, especially for a jazz musician, to try to break new frontiers, to push the limits?

The Romanian music has so much wonderful and original melodies and rhythms. You can say it might be the heart of European Jazz. Back in there 70’s my good friend and musician in NJO Morten Carlsen went to Clus to study tarogato with Dumitri Farcas – I think that he to day has developed his own style on the instrument. I feel you should always walk into unknown fields and never choose the easiest way … and don’t be afraid of making mistakes (ref.: Theloniuos Monk).

What do you expect from the Romanian audience at Cluj International Jazz Festival?

To meet an inquisitive audience… that we can laugh and cry together. Looking forward to meet the Romanians – this is my very first time in the country.